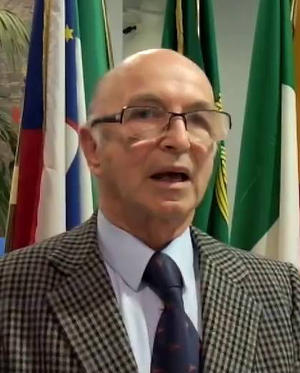 
Gianfranco Varvesi, born in Rome in 1944, spent most of his schooling abroad, attending colleges and schools in Poland, Switzerland and Egypt. After graduating in Law with a thesis in International Law, he entered diplomacy in 1969. In the first years of his career he held positions at the Ministry of Foreign Affairs and later at the press office of the Presidency of the Republic. Later transferred to the Italian embassies in Washington and Nairobi, he then returned to Rome where he served in the office of the Undersecretary of State delegated to European Affairs. Since 1980 Consul General in Tripoli, until 1983, when he assumed the functions of Councilor for Political Affairs at the Embassy in London. Returning to Rome in 1988, he was appointed head of the Office for North Africa, the Near and Middle East and, after 5 years he moved to the Directorate General for Cooperation of which he was deputy general manager until 1998. After holding other positions positions, still at the Ministry, in 2001 he assumed the functions of Secretary General of the European University Institute of Fiesole until 2005. From 2006 to 2008 he was the Diplomatic Advisor to the Minister of Cultural Heritage and Vice President of the Council of Ministers. He ended his career in Vienna as Ambassador to the Organization for Security and Cooperation in Europe in 2011. Since then he has carried out economic and financial consultancy and is involved in some voluntary initiatives.